I came across an Ash in the Cotswolds, Vc33 East Gloucestershire, with Physconia enteroxantha and Physconia grisea side by side. It makes an interesting study, particularly when working the keys. 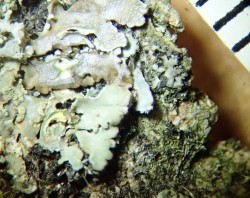 Using the Key in the Flora 2009, p704, both are sorediate, so that takes you to medulla colour and K reaction. Enteroxantha is said to be yellowish, but that really doesn’t work for me. They both look white, though with the eye of faith P enteroxantha might be a bit duller. However, the K+ yellow reaction of enteroxantha differentiates them well, on this specimen anyway. 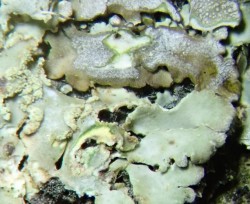 With Physconia enteroxantha out of the way, I go on to the final split in the key for the other part of the specimen, which depends on rhizine form and colour. Some of these are dark, with plenty of side whiskers at right angles, ie bottle-brush shaped. That would make it perisidiosa, but I wasn’t happy with that result. 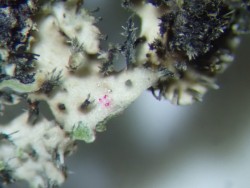 Under surface of both thalli. The pink blobs are on the side that isn't enteroxantha. Note the bottlebrush above and to the right of this. 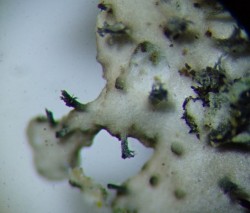 Thallus section of P grisea, with upper cortex above and rhizine emerging at base

That is the clincher making it Physconia grisea, unless I’m mistaken.
I meant to work on Physconias at the Cober Hill workshop but ran out of time there. I think other people were looking at Physconias, so I'm posting this in the spirit of sharing and would love to see other contributions.
Juliet

As you will see, in my opinion LGBI2 is rather misleading about the rhizines of P. grisea. They can be considerably darker and also quite considerably 'frayed' (even branched) than is stated and illustrated in the 'Flora'. For about a year I wondered if there was another taxon involved, or whether P. enteroxantha sometimes lacked K+ yellow pigment but eventually I concluded that the rhizines of P. grisea are not as pale and simple as generally stated.
Top

I rarely look at corticolous species but with this thread in mind, I was tempted by a sorediate Physconia so I collected a bit. On first impressions the distinctly squarrose rhizines and white medulla, which I decided wasn't convincingly K+ yellow, made it look promising for P. perisidiosa, or so I thought. Therefore I wasn't expecting the upper cortex to be pseudoparenchymatous, just as in Juliet's images. I looked again at the medulla in several different places and could find no hint of yellow, at least not to my eyes. Trying the spot test again: K+ pale yellow. Perhaps the reaction is more distinct in specimens with a yellow medulla. The description of P. enteroxantha does state "± yellowish" for the medulla but there is an emphasis in the key and in the description of P. perisidiosa of a "yellowish" medulla. Seeing what I consider to be a white medulla biased my interpretation of a subtle K+ pale yellow result.

Anyhow, what might be interesting - if it hasn't been raised before - is the UV+ bright orange response after the spot test. I wonder if this also happens to the medulla of P. perisidiosa after applying K. If not, UV might offer reassurance for specimens of P. enteroxantha where neither the medulla nor the spot test are strikingly yellow. I'm probably not going to find P. perisidiosa in my area to find out.