I was lucky enough to find fertile Diploicia canescens on the bark of a senescent ash pollard last week, within a few hundred yards of the Severn in the south of Gloucestershire, so fairly near the coast if not exactly maritime. It is only the second time I have found Diploicia canescens fertile in Gloucestershire.
The spores are really odd. The Flora describes Diploicia spores as ellipsoid, and though some of mine are ellipsoid a good proportion definitely aren't. The Flora goes on to say Diploicia canescens spores are (8.5)9-12(15) x (4)5.5-7(7.5) microns; some of mine are much longer, or much wider, or both. Some spores are apparently 2-septate. See attached pictures, micron scale.
Might this just be a question of the 2 apothecia I have examined? Might it be due to an infection? Mark Powell has suggested that perhaps the spores are beginning to germinate and so swelling and perhaps the elongations are hyphae starting to sprout during germination, but as he pointed out, that doesn't address the abnormally sized and shaped spores and the ones that appear 2-septate. 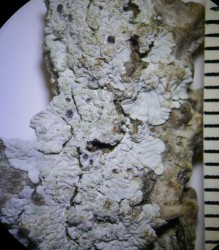 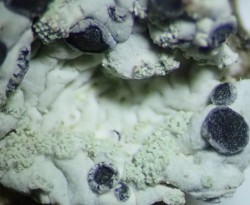 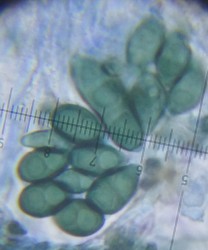 Spores, including "normal" spores and a 2 septate spore. micron scale 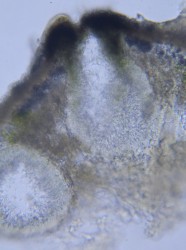 Re: Fertile Diploicia canescens and its spores

Hi Juliet
Not sure I can add anything to Mark's comment. I have been working on spore-drops which often give different measurements from those noted by the authorities. They take on a relaxed form once free from the constraints of the asci. This usually means a micon or two extra in the width.
I'm more familiar with fungal spores where it is not unusual to get rouge large spores in a drop. Different apparatus, of course, and can usually been explained by originating from a basidium with a single sterigma.
There is little doubt that your penultimate image shows germinating spores - often seen in overnight spore-drops.