I seem to come across a lot of this lichenicolous fungi attack on Physcia tenella/adscendens and suspect it is likely to be Laetisaria lichenicola. It might just be because of the lack of leaves making it more visible and my increasing interest in all things lichen. 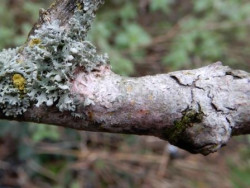 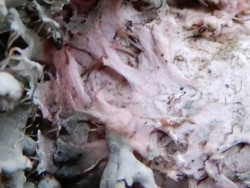 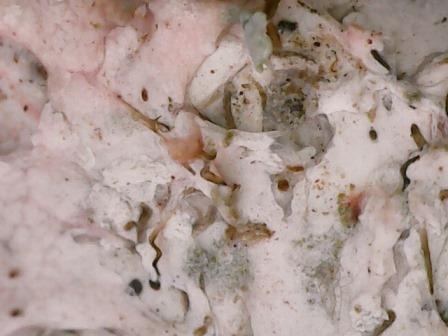 I think your photos are almost certainly of Laetisaria lichenicola but I am not quite going to confirm from the photos for reasons that I will explain. Erythricium (Marchandiomyces) aurantiacum, despite having pale orange bulbils before they are dispersed, sometimes leaves damaged Physcia host that is pinkish in colour and can resemble infections of L. lichenicola. This caution, of potentially mistaking the aftermath of Erythricium infections with Laetisaria lichenicola is noted in the paper in which the latter was described as new to science. So, my concern is that if I confirm from your photos and it turns out not to be, I might give you a false concept of the species.

Now that I have examined many specimens of L. lichenicola, including confirming some of them microscopically, I feel confident to record many occurrences on sight in the field but there are others which are probably 'going over' and which do not show sufficiently clear characteristics. If recording on sight, I like to see at least three features: a distinct pure (albeit pastel) pink colour, a powdery coating (resembling pink fine pruina) created by basidiospores laying on the surface (visible through a lens) and a sort of deterioration of some parts of the host thallus that resembles stretched cellophane.

L. lichenicola (along with various other lichenicolous fungi on Physcia on twigs) is distinctly seasonal and much more common in the winter months. I don't think this is due to being easier to see when the leaves have fallen; I am sure many of these fungi are genuinely seasonal.

If you are able to examine microscopically, it will help to boost your confidence in your material. Otherwise try to observe the features above which can be seen with a lens, and get back to me if needed.

Some more observations and images in the following twitter thread:
https://twitter.com/obfuscans3/status/1 ... 8240472064
Top

Mark many thanks for you insight into the identification of this lichenicolous fungus very much appreciated.
Top
Post Reply
3 posts • Page 1 of 1