I'm having problems with this tiny hairy jelly from a Cotswold oolitic limestone walltop.

I've tried several keys, including the Draft key to Collemataceae on the BLS website.
https://www.britishlichensociety.org.uk ... %201.4.pdf
Here are my workings using that key:
1 Thallus foliose >8
8 Not dwarf fruiticose >14
14 Lobe tips not tightly appressed to rock >16
16 Not a cushion, foliose with branched lobes >23
23 (problem understanding precisely what is meant by tomentum) both surfaces are hairy, the top very shortly so. >24
24 Upper surface does not have a dense tomentum. >25
25 Isidia present >26
26 Leptogium saturninum or hibernicum. But wrong habitat (and distribution), and too small for a Leptogium ss. It is possible that the thalli needed to grow some, but there were several on two different pieces of stone.

Using the key in the 2009 Flora, I thought I was in the Collemodium section of the Leptogiums and liked L massiliense the best but the lobes are not closely appressed.

Where have I gone wrong? Any guidance would be much appreciated. 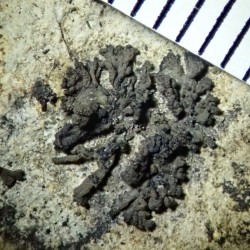 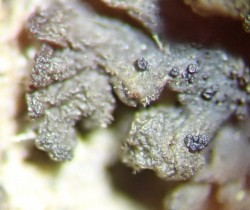 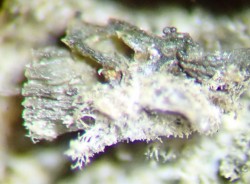 Long-hairy lower surface and rhizines (does this constitute a tomentum?) 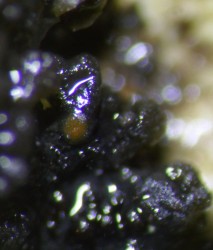 Pycnidium. Comes into view only after wetting. 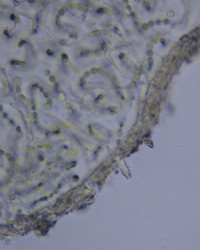 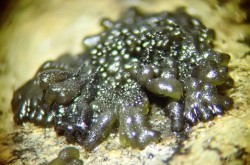 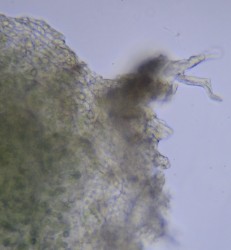 Before I give my opinion on the identity, I am repeatedly disappointed by dichotomous keys. In my experience they are the cause of numerous misidentifications and misunderstandings. Whether they are a necessary evil, I'm not sure. For the moment they are the practical reality so we have to learn how to use them. I use dichotomous keys but always treat the 'answer' I arrive at with much scepticism and go on to a validation process. Many, many times I have failed to arrive at a convincing answer and it is only when I finally work it out by another means that I go back and work out what the compiler of the key intended.

My opinion of your lichen, not 100% certain but a very strong hunch, is that you have Scytinium turgidum. I will attach below one of the specimens I have examined while considering your query, not a great photo but gives an impression of the sort of thing and size of what I call S. turgidum.

Your first major problem arose at couplet 23 with the issue of tomentum. Many of the jelly lichens have pale rhizines beneath and I have seen them very well developed in species such as Blennothallia crispa. My specimens of Scytinium turgidum frequently have small white rhizines beneath. I haven't managed to find much/anything in the way of hairs on the upper surface of my specimens but I can imagine any of them producing tiny sparse hairs.

Paul had the unenviable job of compiling the key to Collemataceae. I wouldn't have wanted the job so my comments are not criticism. The key is a bit 'cobbled' together from the various keys in LGBI2. The tomentum issue is probably transferred from the old Leptogium key and in that key it was used to distinguish large foliose Leptogium species which are tomentose (such as L. saturninum) from large foliose species that are not distinctly tomentose. In that key, species such as 'Leptogium' turgidum had already been keyed out before the couplet asking about tomentum.

The drawing on page 550 of LGBI2 has misled several people (including me initially) into thinking that L. turgidum must be L. schraderi due to be wrinkled. In fact, although L. schraderi is particularly wrinkled, I consider all members of the 'plicatile group' (turgidum, schraderi, plicatile) to be wrinkled when dry.

I am happy for my opinion to be challenged/contradicted but I have had the privilege of discussing this group in the field with Brian so hopefully I picked up some wisdom from him. 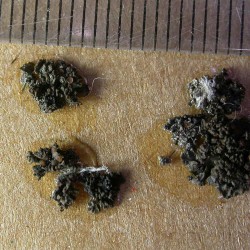 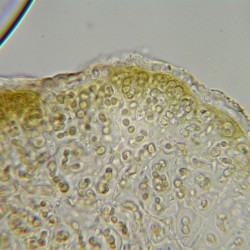 A great enquiring post and a thoughtful and detailed reply.

This is partly what the forum is for and I hope it will encouraged more members to participate.

Hello everyone
Feedback on all aspects of the LGBI3 project, especially keys, is very welcome, and I have tweaked the master copy to try to deal with this. In this case we are dealing with a terminology problem, that would probably be best dealt with in an extensively illustrated glossary (something we are considering). A tomentum would normally be considered as a continuous, at least fairly dense cover of hairs. It helps if you are familiar with the lichens included in the other couplet - but then you might not need the key at all...
Best wishes
Paul
Top

The draft definition of tomentum for LGBI3 has been slightly expanded and is currently as follows:

tomentum (-ose), felt-like mat of hyphae; a special case of pubescence in which the soft hairs are matted and usually pressed close to the surface.

If I am right, we are presented with a familiar problem. Do we stick with the terminology traditionally used for a genus and add notes to the glossary to explain how the normal meaning differs in certain genera, or do we change the traditional descriptions so they make more sense with a more standardised glossary. Neither way is particularly neat and we are stuck with finding solutions to the peculiarities that are the unfortunate legacies of authors working in different genera using terms in their own preferred ways.

An example of true tomentum, as defined by our current proposed definition would be seen on the upper surface of Peltigera membranacea. In that case the small hairs are predominantly horizontal to the surface and really do resemble felted material.

"It helps if you are familiar with the lichens included in the other couplet..." That is a perpetual problem. It is understandable that Juliet would be tempted to consider any hairs on either surface as significant, especially those short ones on the upper surface. In lichenology we are often expected to detect almost undetectable subtleties so when we notice a feature we assume that it is important enough to 'count'. Looking again at the hairs on the upper surface of Juliet's lichen, the hairs look mainly at the edges and I have managed to find a few instances of similar on Leptogium turdidum, very sparse and confined almost strictly to very close to the margins.
Top

I tried to key out Juliet's lichen with the new Collemataceae key, assuming that we have decided that it doesn't have any true 'tomentum' and arrived at couplet 40 where we are asked whether it is
a) On calcareous soil, brick or mortar
b) On rocks or amongst mosses on rocks

Scytinium turgidum and S. schraderi are keyed out by following the first part of the couplet, S. plicatile by following the second part and their presence isn't duplicated on account of this couplet.

Juliet's lichen was growing on a limestone wall so one would more likely chose the second option in the couplet but that leads to S. plicatile and not to S. turgidum.

An example of this problem of splitting on substratum at couplet 40 is that I have not infrequently found S. plicatile and S. turgidum both growing together on the tops of limestone chest tombs, same substratum but couplet 40 would require you to chose different substrata.

I apologise that I am finding problems with no intention of solving them as far as working on the keys is concerned. Personally I would ditch the dichotomous keys for families/genera altogether and instead provide tables of characters where they help and also separately work on multi-access keys. However, I feel certain that dichotomous keys will be provided and they will be a mixed blessing. They will lead to many incorrect identifications but at least they will be 'something'. I am not trying to campaign against the inclusion of dichotomous keys, just expressing my considerable reservations about them.
Top

This is a fascinating thread, thank you. The issues of terminology are obviously not unique to lichens. Have you seen 'Mosses and other bryophytes - An illustrated glossary ' by Malcolm and Malcolm? It's a wonderful resource and I'd love a similar companion for lichens.

I've recently started to try to remember to take photos of all the key characteristics of specimens I (try to) identify. My plan is to create my own species albums that show these, along with habitat shots, wet and dry etc.. For example:

This is, of course, what Paul is doing with FLGBI and I only wish I could get such lovely microscopic photos.

Online photo resources are getting better and better but they tend. understandably, to be of the upper surface. Wouldn't it be great to have more photos from below.

Forgive me if I'm repeating conversations that have been had before, as I'm sure they have.
Top

Thanks All for your responses. It's not just me, then!

I attach two more photos showing that the small hairs definitely do occur on the upper surface, in this example anyway. I don't think they are evenly spread across the whole lichen, though it is hard to tell once the isidia become dense. Perhaps they are caducous (fancy word for falling off early). Mark is correct in thinking that as I could see the feature I assumed it must be important, though I would not have seen it with just a hand lens.

The following photos were taken with a Panasonic Lumix TZ100, hand held against the eyepiece, with strong side-light throwing the background wrinkles into shadow. Not stacked.
The previous photos were taken with the Olympus Tough with its internal stacking facility, but I think this just blurred and confused the issue at this resolution.
I also tried using the Eos 1300D attached to the trinocular, but the results were not as good, possibly due to unfamiliarity on my part.

I agree with Dave about the need for photos of the lower surfaces and would also put out a request for photos taken from the side so that you get a better idea of the 3-dimensionality of the subjects - how high the apothecia sit, that sort of thing. 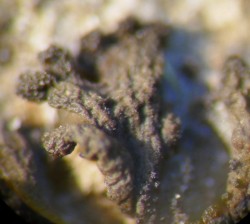 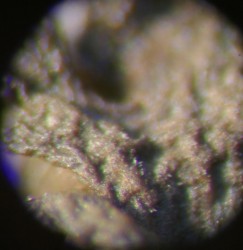