I got some new bits for my microscope today, so have spent the day looking at what I could find: a rust on Sweet Vernal-grass (Anthoxanthum odoratum) from my garden. Had to get some help from an ecologist friend on the grass identification, but the attempted rust ID is my own! Photos hopefully attached.

I have referred to 'Dutch Rust Fungi' and this got me to Puccinia brachypodii, owing to (1) host organism; (2) thick-walled paraphyses.

The description mentions that "taxonomic interpretations of this species are manifold" - and I see the description of Puccinia poae-nemoralis on Plant Parasites of Europe (here: https://bladmineerders.nl/parasites/fun ... nemoralis/) would seem to match my observations?

But I'm pretty new to this! So would be interested to know whether I'm on the right track. And what people's thoughts are on the P. brachypodii s.l. - and how to delineate the varieties / species in this complex...? 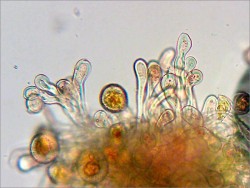 Paraphyses 2. 400x mag in water. Capitate and some bent below the head. 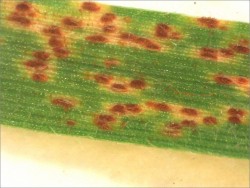 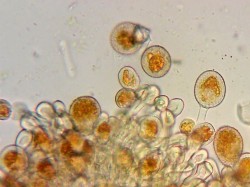 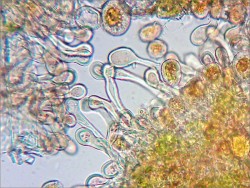 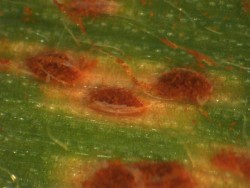 Hello Clare
Welcome to the group - and a great first post!
Rust fungi are broadly considered to be strongly host-specific, due to their biotrophic mode of nutrition that involves parasitism of living plant tissues (rather than necrotrophs that kill the tissue and eat it afterwards). There's actually a quite limited suite of molecular phylogenetic papers on rust taxonomy and host specificity, but those that have been published almost universally support this hypothesis.

That means that we can use the host identity as a legitimate tool for rust identification, along with physical characteristics, and host specificity at plant genus level seems to be the norm. The identification that you propose looks good to me. However, you will have noticed that Puccinia brachypodii is listed as "sensu lato" in the book you refer to, and three varieties are referred to (and accepted in the online CBIB database - http://www.basidiochecklist.info/) One of these - var. poae-nemoralis - is listed in the CBIB database (see http://www.basidiochecklist.info/Displa ... GBNum=2756) as having several plant hosts, including Anthoxanthum odoratum as well as Glyceria and Poa species.

However, in another rust fungus "bible" (Klenke & Scholler's Pflanzenparasitische Kleinpilze, 2015) Puccinia anthoxanthina is accepted as a separate species restricted to Anthoxanthum, and that name is listed as a synonym of P. brachypodii var. poae-nemoralis in CBIB. My preference would be to record your find as P. anthoxanthina, to keep the "one rust species to one plant genus" rule, but either name would be considered acceptable by many. The important thing will be to record the host plant information as well as the fungus name, locality etc.

Sorry it's so complex, but I hope this points you in the right direction.
Best wishes
Paul
Top

Hi Paul, how interesting! And what a helpful answer. Thank you. Fascinated to hear about this distinction between biotrophic / necrotropic modes of nutrition. I only just recently started getting into rusts & smuts and they really blow my mind.

I will put the record into FRDBI2, as you suggest.

Thanks again! I appreciate the explanations, as well as the ID advice. Clare
"searcher after curiosities"
Top
Post Reply
3 posts • Page 1 of 1

Return to “Rusts, Smuts, and Mildews”