Not technically fungi, but often lumped together with fungi
Post Reply
3 posts • Page 1 of 1

I came across this Wolf's milk (lycogala sp I think) and another slime mould (pictures 2 and 3), I was wondering if anyone could help me to identify them? 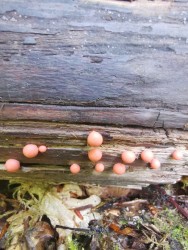 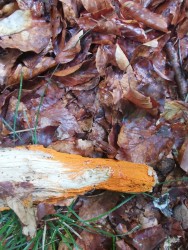 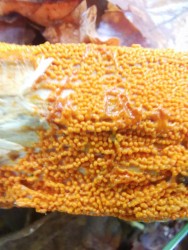 I'd say that microscopy would be the only definitive way to be certain as to whether it's L. epidendrum or L. terrestre.

However, as a rough "field characteristic", L. epidendrum invariably turns brown, with its (when mature) dry interior becoming a dark grey/brown colour.
I'm told that the interior of mature L. terrestre remains a dark red colour - but I haven't seen enough of it to be able to confirm whether that's always the case. (L. epidendrum is by far the more common species hereabouts).

The other one is too immature to suggest anything with any sort of confidence, and (when mature) would also need microscopy to be certain. - There are numerous species having plasmodia that go through yellow/orange stages during the maturation process.
Could potentially be one of the Trichia species - but there are numerous other species that could look pretty much identical at this stage.

Thanks very much for taking the time for such a detailed response.
When Lycogala pops up on my fungi groups we tend to identify it as Lycogala sp and band the two together, so really appreciate having some more info on characteristics of the two!

Ahh I thought that may be the case, I should have brought it home to check in my microscope, but just picking it up covered me in slime and didn't fancy it on the car seat

Thanks so much for the info,