Is this a slime mould - help please?

Not technically fungi, but often lumped together with fungi
Post Reply
3 posts • Page 1 of 1

Is this a slime mould - help please?

Came across this in my woodpile. Rotten dried Hazel. Have no idea how to go about identifying it! Any help appreciated. 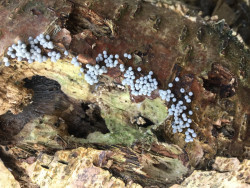 Re: Is this a slime mould - help please?

Unfortunately, without microscopy, slime moulds (apart from a very few species) are pretty much impossible to identify to species level, and even getting to genus, based on "macro" images alone, is often impossible.

The sporangia here do have the "sort of look" for some of the Badhamia species, so my best guess suggestion would be that It's possible you might have one of those species.

Can't see any close up detail, so can't determine whether the surface of the sporangia has embedded white-ish "lime" crystals.

One of the sporangia near the bottom of the photo has split open, revealing a capillitium, a network of white thread-like elements. that is intertwined with the spore mass inside the peridium. again, that "look" is fairly typical of some of the Badhamia species.

One of the more commonly seen Badhamia species is B.utricularis which has some similarities to what you have here, but it tends to be found hanging down on fairly lengthy stalks, like tiny but fairly dense bunches of grapes.

Although similar looking, I can't see any lengthy stalks, and I don't think that your example is sufficiently densely bunched to be that species - a couple of images of which I've attached below. 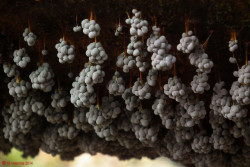 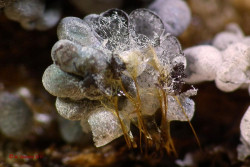 Common sense is not so common.
Top

Re: Is this a slime mould - help please?

Thank you for your comprehensive reply.
Given the little bit I know of Fungi, the less I know of Lichens and the absolutely nothing I know of slime moulds... there’s a lifetime to be spent finding out more!
Top
Post Reply
3 posts • Page 1 of 1