Please try to include photos to show all parts of the fungus, eg top, stem, and gills.
Note any smells, and associated trees or plants (eg oak, birch). A spore print can be very useful.
Forum rules
Please do not ask for the identification of fungi for edibility or narcotic purposes. Any help provided by forum members is on the understanding that fungi are not to be consumed. Any deaths or serious poisonings are the responsibility of the person eating or preparing the fungus for others. If it is apparent from a post that the fungus is for eating or smoking etc, the post will be deleted and a warning given. Although many members do eat fungi, no-one would be willing to take someone else's life into their hands.
Post Reply
5 posts • Page 1 of 1

I photographed these 2 fungi at Thruscross Reservoir near Harrogate on 22nd October. The smaller, more immature specimen had obviously been disturbed and its cap was no longer connected to the stipe. All specimens had a purple/red cap, one with an area of white. The stipe appeared in all cases to have a uniform diameter and a pinkish flush which is quite distinctive. The stipe appeared robust but this is based purely on appearance not touch. They were growing beneath pine trees but the photographs are all taken through brambles. The fungi were not actually accessible so it was not possible to peel the cap or smell/taste the fungus. I appreciate Russula are very difficult to identify especially without these latter details. Nevertheless I wondered if an informed guess could be made based particularly on the stipe and restricted views of the gills. 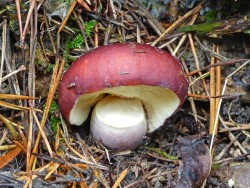 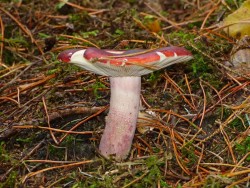 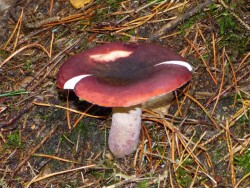 As you are obviously aware, genus Russula contains quite a number of similar looking species, and without physical examination of the samples, (and in the majority of cases, microscopy too), confident identification is usually impossible.

My best guess based on general looks, along with the pine needles in shot would be something like Russula xerampelina, (Crab Brittlegill).
The overall colouration looks about right, the gills showing in your first photo do appear to be very pale yellowish, and the stipes have the typical flush of purple-ish/red which that species often has. (Note though, R.xerampelina can also have a more or less entirely and strongly purple-ish coloured stipe).

Unfortunate that you couldn't physically get hold of one, as that species usually has a rather noticeable crabby-shrimp-like shellfish sort of smell.

As I say, just a best guess, as I can't think of anything else!

Thanks for your response Mike and your best guess. I appreciate it can be no more than that in the circumstances. I have purchased "The Genus Russula in Great Britain with synoptic keys to species" by Geoffrey Kibby but in this instance due to limited access was not able to narrow down the options as I would have wished. As someone who enjoys the "looks" of fungi I am though somewhat reluctant to peel the caps. Many thanks for your help and thoughts.
Regards,
Bob
Top

...I try to bend down to get a smell, but an reaching an age / fitness where bending down is easy enough, its the getting back up that can be the challenge. I often get light-headed after some time stooping.
Adam Pollard
Site admin
Top

Hi Adam - the time it takes me to get a satisfactory photograph has my wife suggesting that she's going to bring a chair along with us!