Hi - Newb here - Any idea what this was?

Please try to include photos to show all parts of the fungus, eg top, stem, and gills.
Note any smells, and associated trees or plants (eg oak, birch). A spore print can be very useful.
Forum rules
Please do not ask for the identification of fungi for edibility or narcotic purposes. Any help provided by forum members is on the understanding that fungi are not to be consumed. Any deaths or serious poisonings are the responsibility of the person eating or preparing the fungus for others. If it is apparent from a post that the fungus is for eating or smoking etc, the post will be deleted and a warning given. Although many members do eat fungi, no-one would be willing to take someone else's life into their hands.
Post Reply
3 posts • Page 1 of 1

Hi - Newb here - Any idea what this was?

I just ran over this whilst lawnmowering the garden and got it all over me - I'm strugging to identify, any help appreciated!

Thanks for your help! 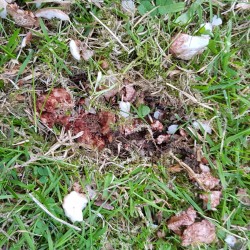 What is left of the stem - it had a reddish root 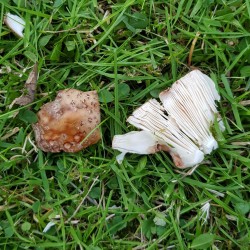 Hello and welcome to the site
in 99% of cases this would be an impossible request - not unlike trying to identify an insect from a smear on a windscreen. However, you have struck lucky and there is enough "evidence" here to name your fungus with confidence. It is (was) Amanita rubescens, one of the toadstools with a longstanding English name: "The Blusher".
You can see the relevance of the name in your photos - you mention the "reddish root". I have seen this fungus recently in a couple of widely spaced sites in Yorkshire; I suspect all that rain acted as a trigger. This a mycorrhizal species which grows in association with the roots of trees - it would be interesting to know which tree species this was growing with.
We do not comment on edibility on this site, but the name Amanita can trigger worries as some of the most deadly species on the planet belong to that genus; but rest assured this is not one of them and is not a problem in your or anyone else's garden - indeed it is a boon to whichever tree/s it is growing with.
Cheers
(another) Chris
"You must know it's right, the spore is on the wind tonight"
Steely Dan - "Rose Darling"
Top

Much appreciated Chris - We have a mature oak tree in the garden and it was around 20 feet from this, shaded by a rhododendron bush.