Please try to include photos to show all parts of the fungus, eg top, stem, and gills.
Note any smells, and associated trees or plants (eg oak, birch). A spore print can be very useful.
Forum rules
Please do not ask for the identification of fungi for edibility or narcotic purposes. Any help provided by forum members is on the understanding that fungi are not to be consumed. Any deaths or serious poisonings are the responsibility of the person eating or preparing the fungus for others. If it is apparent from a post that the fungus is for eating or smoking etc, the post will be deleted and a warning given. Although many members do eat fungi, no-one would be willing to take someone else's life into their hands.
Post Reply
4 posts • Page 1 of 1

Would anyone like to say if this is A.pantherina or A.excelsa? There was no volva, only a swollen base. The ring was badly damaged but plain. Smell of old potatoes. Under beech and oak. 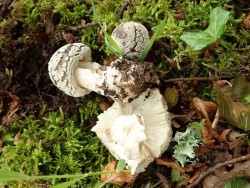 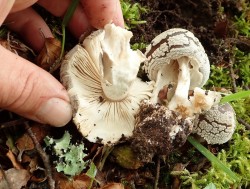 It has the look of A.excelsa but the smell of raw potatoes points to A.citrina. It's a shame there weren't any mature samples nearby.
Top

There were several others coming up. I'll try to go back there later or tomorrow.

I think that the only "reliable" macro characteristics are; -

1) - In A.pantherina the veil fragments should be pure white, whereas in A.excelsa var. spissa, they are greyish.

Those on your photos do look very white, but it's always difficult to be certain with photos. (Depending on exposure, greys can look white, and vice-versa).

Having said that, I've been fooled several times even when I've had the specimens in front of me!

2) - The bulbous stem base of A.pantherina has a distinct gutter-like "flattish" top, where it meets the thinner part of the stem. A.excelsa var. spissa doesn't, being more rounded at that point.

Not A.citrina though - even with a smell of potatoes, not with a cap such a dark brown colour.
However, if that smell was actually more "radish-like" (which many people also liken to potato smell) that would point to A.excelsa var. spissa.