Please try to include photos to show all parts of the fungus, eg top, stem, and gills.
Note any smells, and associated trees or plants (eg oak, birch). A spore print can be very useful.
Forum rules
Please do not ask for the identification of fungi for edibility or narcotic purposes. Any help provided by forum members is on the understanding that fungi are not to be consumed. Any deaths or serious poisonings are the responsibility of the person eating or preparing the fungus for others. If it is apparent from a post that the fungus is for eating or smoking etc, the post will be deleted and a warning given. Although many members do eat fungi, no-one would be willing to take someone else's life into their hands.
Post Reply
10 posts • Page 1 of 1

Hi. I spotted this bracket fungus on an old, dead Beech. Could anyone help me identify it please. Many thanks. 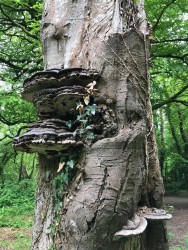 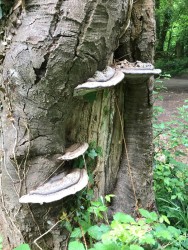 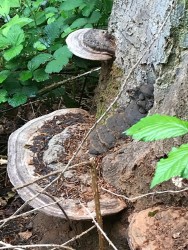 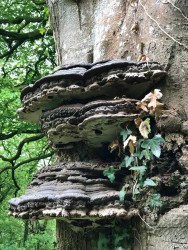 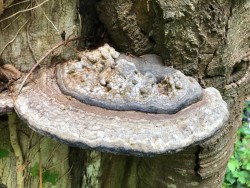 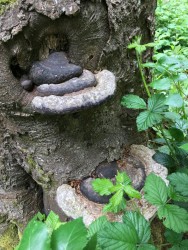 Hi and welcome to UK fungi
on a number of your photographs one can detect a pinkish spore deposit - especially on the dead ivy leaves. This would lead to the fungus being a Ganoderma species (though the spore deposit usually tends to cinnamon). To be 100% certain of which species one should always check spore size under a microscope, but I think this is probably Ganoderma applanatum.
Regards
Chris
"You must know it's right, the spore is on the wind tonight"
Steely Dan - "Rose Darling"
Top

Thanks for the welcome and the reply Chris

I'll go have a closer look at the spores, I have a microscope at work so I can check the size when I'm off furlough.
In the mean time, I also read that the Yellow flat-footed fly is fussy about where it lays its eggs/galls and this can help to get an
accurate identification (is this correct?) so I will look for galls too.

If you have the time could you or anyone reading this recommend a good uk mushroom/fungus guide please? I usually take photo's when out and about so size isn't too important for now, detail and ease of use is more so.

I understand that the galls can frequently be found on G.applanatum, but not on other Ganoderma species so should definitely confirm ID if you do find them. (I've not yet seen G.applanatum with this type of gall present).
See info on "First Nature" website, here: - https://www.first-nature.com/fungi/gano ... anatum.php

We have some useful info on general fungi literature here, (although some of the links now appear to be defunct!!!): -
viewtopic.php?f=3&t=156

If you can get hold of a copy, I'd still recommend "Collins Complete Guide to British Mushrooms and Toadstools" by Paul Sterry and Barry Hughes (2009), as a good first field-guide.
(No single book will ever include everything that you might come across, but that book is packed with good photos and information about the more commonly found species).

If you want to push the boat out with a much larger book, the recent two volume epic "Fungi of Temperate Europe" by Thomas Læssøe and Jens H.Petersen is about as good as it gets before you get into the out and out technical literature.
Pretty expensive, but with superb photos and descriptions of a great many of the fungi to be found here in the UK as well as across Europe - one of the best books to come along in many a year: -
viewtopic.php?f=3&t=156&start=24#p11649

Thanks for the reply Mike

I'll look out for the galls next time i'm walking past and will post some photos if I find some.
I can't find the Collins book for a reasonable price, I guess its very popular and out of print at the moment so I'll have to wait for more copies to be printed. The other suggestion is out of my price range for now but seems really informative.
The First Nature website is really good though, well laid out for identification and good information too so I'll use that and this forum for now.

The gall-midge is far from frequent in Britain: https://species.nbnatlas.org/species/NBNSYS0100001385 I have seen it where that northernmost dot is, at the very species-rich Anston Stones Wood, towards the extreme SE boundary of Yorkshire.

Just as a general comment it would be really useful if UK fungi folk could give an indication of where they are based - no-one is after anything confidential, a county would do, which could sit with their details when they post. Just a thought, it might make for better responses.

Regards
Chris
"You must know it's right, the spore is on the wind tonight"
Steely Dan - "Rose Darling"
Top

Chris Yeates wrote: ↑Sun May 10, 2020 7:47 pm The gall-midge is far from frequent in Britain: https://species.nbnatlas.org/species/NBNSYS0100001385 I have seen it where that northernmost dot is, at the very species-rich Anston Stones Wood, towards the extreme SE boundary of Yorkshire.

Just as a general comment it would be really useful if UK fungi folk could give an indication of where they are based - no-one is after anything confidential, a county would do, which could sit with their details when they post. Just a thought, it might make for better responses.

Couldn't agree more. I just deleted an account from Panama although I suspect said person is not interested in anything other than spamming
Adam Pollard
Site admin
Top

I suspect that you are right, in that it may be out of print. Good condition used copies do sometimes appear at reasonable prices on sites such as Amazon, so it's worth checking every now and again.
The other two books that are usually recommended for someone new to fungi are: -
"Mushrooms" by Roger Philips, and "The Encyclopedia of Fungi of Britain and Europe" by Michael Jordan.
I suspect that both of those titles too, may be out of print. - but again, good copies frequently crop up on the used book sales market.

Various nomenclature changes within the last few years will mean that these books, (and all but the most recently published), will be somewhat out of date with some of the scientific names. But nevertheless, they are well worth tracking down for anyone just starting out in mycology.
Unfortunately, all the new titles, (including those of non-specialist "general mushrooms and toadstools type", seem to be becoming ever more expensive, with few of the more "useful" recent offerings appearing below the £35-40.00 price mark.

As ever, Chris, useful and pertinent info.
I had blindly assumed (because many books mention the appearance of Yellow flat-footed fly galls on G.applanatum), without mentioning the fly's distribution area, that such galls would be pretty much as widespread as are the fungal fruitbodies.

Obviously though, the galls will only be there if the flies are there.

I hadn't realised that these flies are relatively new to Britain (apparently first being recorded here in about 1990), and only slowly gaining a foothold northwards as the years go by.
I'm (in Lancashire) not too far north of Anston Stones, so maybe, with a bit of luck, a possibility of seeing some evidence of their presence in the not too distant future.

The gall-midge is far from frequent in Britain

Interesting link, thanks Chris. Even though I'm far from recorded locations of Agathomyia wankowiczii, I'm in Cornwall, I still hoped to find some galls to confirm ID, alas, no galls found. I did take some more photo's of the underside of the brackets and a cross section photo too which all show the spore holes (?). I noticed that, as you mentioned in your first reply, the spores are a more cinnamon colour than pinkish, photo's can be misleading, so this looks to confirm it as Artist's Bracket. I'm still going to use the microscope at work when I'm back, although I have no idea of this process of measuring spores yet.


"Mushrooms" by Roger Philips, and "The Encyclopedia of Fungi of Britain and Europe" by Michael Jorda 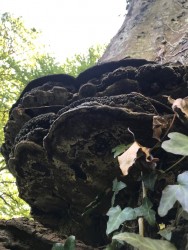 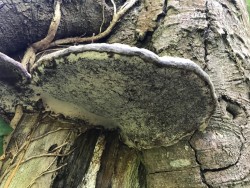 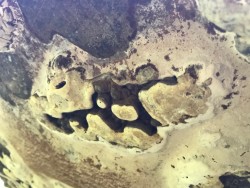 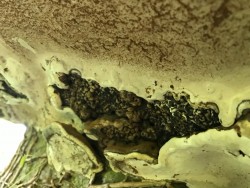 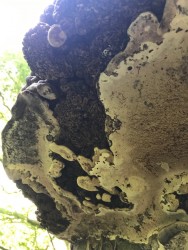 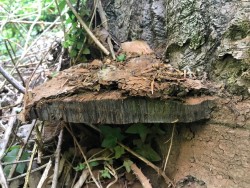 That final photo convinces me that it is G australe. It looks to show two years growth of tubes and there is no sterile layer between them as there would be for G applanatum.
Top
Post Reply
10 posts • Page 1 of 1