I think with these spores it must belong into the group of Entoloma vinaceum - turbidum - pseudoturbidum.
I have no literature at hand, but there are only a few species with these small, roundish, weakly-angled spores, may be 4 or 5 - should be not too difficult in that case, but the farinaceous smell is somewhat irritating for E. turbidum (what would have been my first guess ...).

Steve wrote: ↑
Mon Oct 03, 2016 3:38 pm
That last post was identified as most likely Entoloma henricii - a rater rare Pinkgill, by Noordeloos on the BMS Facebook Group. Showing that even with just a broken cap, the microscopy can enough to give an ID.
Steve

The description & this identification of the collection that we made at Longshaw Estate in Sept. 2016, prompted me to check out a similar collection that I made on 4/9/15 in local 'waxcap' grassland. I had concluded that this was E. transvenosum as the spores size fitted well as did the veined sides of the gills (athough this sp. is found under trees in woods and parks). But I hadn't checked the cuticle nor the basidia to see if they were 4-spored (the majority of Entoloma's are!). Fortunately I still had the voucher and I managed to locate five basidia all of which appeared to be 2-spored: so I conclude my collection is indeed henricii. The cuticle also seemed to be a palisade rather that a cutis although I was stretching my ability at examining dried material here!
I also made a similar collection at Tyntesfield on 23/8/10 in grassland which I also ID as transvenosum: again I feel this was probably henricii. Unfortunately I can't check the basidia and cuticle of this as the dried specimen has already been sent to Kew. So why did I not pick up on henricii? To begin with, transvenosum is in the Section with the 'tricholoma' types whereas henricii is in Section Trichopilus (types with fibrillose/tomentose/scally caps). Noordeloos' original description (FE5) states the cap is indeed "velvety-pruinose" but an amended description by him (FE5a) does not mention this feature.
Top

Excellent finds Roy!
It was certainly one of the finds of the weekend at Longshaw.
It looks like there will be a Club and Coral Workshop there this year to complete the CHEG profile.
Steve
Top

roy betts wrote: ↑
Mon Apr 09, 2018 12:56 pm
[...] whereas henricii is in Section Trichopilus (types with fibrillose/tomentose/scally caps). Noordeloos' original description (FE5) states the cap is indeed "velvety-pruinose" but an amended description by him (FE5a) does not mention this feature.

this I don't understand. E. henricii is one of only two or three species in Entoloma which have the unique feature of a hymeniform cuticule. So they are neither fibrillose nor tomentose or scally. They are just smooth and a bit pruinose. E. henricii ressembles in that respet a Dermoloma species.
I have found that species two time in waxcap grassland now, and I have the feeling that the species is increasing for what reasons ever.

Thanks for those useful comments Andreas.
I've just been doing some long overdue 'filing' of my fungi images and found these that I took of E. henricii on 4/9/15 (hope they load OK). 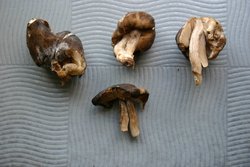 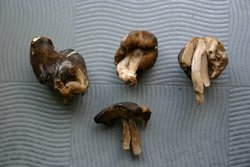