Found this week at Hale Hall Wood in Cheshire. Lycoperdon utriforme growing on woodchip in woodland. I expect this species to be on grass or in dunes. I have not yet found a record for it growing on this substrate. Has anyone else found any in a similar situation? 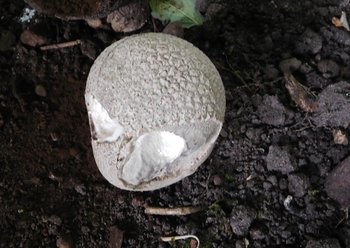 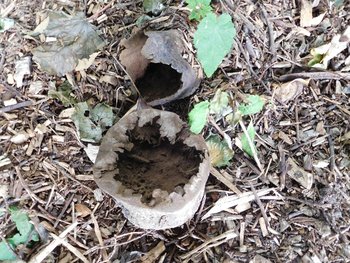 I don't wish to comment on the ID, a photo is not enough for me to contribute, but are you sure it was on wood chip? It might be that the 'roots' are actually in soil. As an aside I've found lots of unexpected fungi on rotten wood, including Tylopilus felleus, Cantharellus tubaeformis and Collybia butryracea.
http://www.leifgoodwin.co.uk/Fungi/Fungi.html
Top

I agree. But this is a grassland species. So why choose a bit of soil in a wood that is covered by woodchip? I have no explanation.
Top

I have no idea either. I've seen Field Blewits in woods, and Wood Blewits in fields, no idea why. The question is whether or not a grassland species is forming a direct symbiosis with grass, or grassland plants, or simply dependent on the habitat created by grassland species e.g. metabolites. If the latter, then it could stray into unexpected locations. Your find does suggest it is not symbiotic with grassland plants, unless there was a substitute nearby. As an example, honey fungus can attack rhubarb! Who would have thought it.
http://www.leifgoodwin.co.uk/Fungi/Fungi.html
Top

I think I have finally solved this. Within the wood, very near the woodchip pile, is a small grassless paddock where children exercise some ponies. This Lycoperdon species also grows in the paddock. The woodchip is replenished with material that obviously comes from the stables. I assume that the horses eat grass or hay that contains spores that are later deposited in the paddock and woodchip pile. This is sufficient to support the fungus.
Top
Post Reply
5 posts • Page 1 of 1