How do Clavaria function?

How do Clavaria function?

I'm trying to develop my long-term interest in fungi into something just a little beyond admiration. A couple of days ago, I came across some Clavaria but can find little about them in books. It isn't (at this stage anyway) a question of specific identity but an explanation of how & where they bear spores. To be frank, they look rather like headless bean sprouts. Can anyone elucidate the mechanism?
My id books are all surpisingly lacking in this respect. Any information would be appreciated. 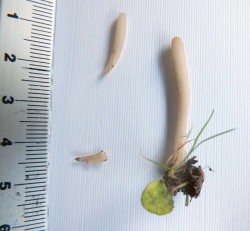 Where are the spores?

Hi, and welcome to UK Fungi.

Most, (if not all?), of the Clavarioid fungi are basidiomycetes, and they produce spores, (on the tips of structures named basidia), in exactly the same way as normal “mushrooms”.
In normal mushrooms the spores are situated on the surface of the gills, and in Clavarioids, they are situated on the “general” outer surface of the fruitbody.
The mature spores drop off, to be dispersed by wind etc., in exactly the same way as normal mushrooms.
If you were to lay a Clavarioid fruitbody onto a piece of glass, and cover it with some sort of container to avoid draughts, you would eventually see a spore print deposit following the general shape of the fungus, where spores had been released. - Just in the same way as you would when taking a spore print from a normal gilled mushroom.
Ascomycetes on the other hand, such as cup fungi, earthtongues, the tiny “disco’s”, Cordyceps species, Morels, and a multitude of others, produce their spores in “asci”. - Tube like structures with their tips at the fruitbody’s hymenial surface, (the fertile layer – spore bearing surface), in which the spores mature, to be forced out when the required environmental conditions are met. (Ascomycetes are sometimes referred to as “spore shooters”.

I would highly recommend this book. It is packed full of fascinating info for non-experts. 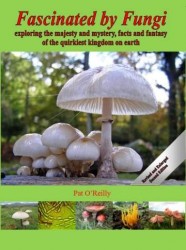 Thank you so much for your very informative reply to my post. I shall try obtaining a spore print as you describe. I really do appreciate the clarification.
Top
Post Reply
4 posts • Page 1 of 1