Hi all,
Mike , Lancashire Lad, will be pleased - I have managed to find, with help from a local friend, something I have looked for for a very long time, Scarlet Elf Cup - Orange Variant Sarcoscypha austriaca var. lutea.
So I will be asking Kew if they want a voucher specimen.
Its only once record on both NBN and FRDBI, so I have put this on now.
The weird thing is - its now dried, but isnt orange anymore, its quite red. No, I haven't got them mixed up!!!
Any views on this strange phenomenon? 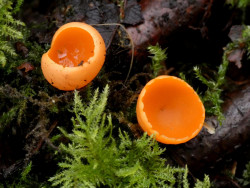 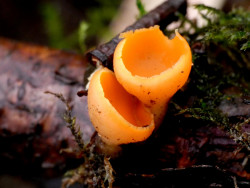 Just a few thoughts on the matter.

Of the two, xanthophylls are generally yellow in colour, whereas carotenes are generally dark-orange (although deeper red colours can be synthesised).

This would suggest that, in the process of drying these fungi, you have converted the xanthophylls present in the var lutea into carotenes.

As to the mechanism for this, I can only speculate. Perhaps there is an enzyme in var lutea which converts xanthophylls to carotenes which becomes unstable as the fungus after collection whereas the production of carotenes continues for some time. Perhaps there is an enzymes which causes a dehydration of the xanthophyll, further increasing the conjugation and resulting in an even deeper red colour which ceases working in the dried specimen.

Investigating the mechanism of reddening on dehydration would likely require the study of the metabolic pathways of at least var austriaca. (Does it synthesise carotenes or xanthophylls which then further react to form carotenes?)

I hope that helps
Simon
Top

Thanks Simon, interesting stuff. A similar question to mine arose on Ascofrance a few years ago I now find, with a response from expert, Zotto - ''undoubtedly you have S. austriaca, considering spore shape and guttulation, and undulating hairs. The colour variants do not deserve any taxonomic value, in my opinion. They appear within a population and might originate from genetic defects.''
So I now think that mine isnt var lutea, but a simple colour variant. Strange as there were two separate twigs with the same colour, I wonder what you say is thus partly responsible.
Thread as here:-
http://www.ascofrance.com/forum/21237/s ... -var-lutea
Top

With what I learned after I found orange variants, I'd be pretty certain that yours are indeed a colour variant of S.austriaca.
So I'd agree with your conclusions from your post immediately above.

The orange variety is still something that is rarely seen, and the records don't give us much help either! - As (to my knowledge) none of the official records for S.austriaca actually mention whether the particular record is for a colour variant. (And the colour can vary from red, through orange, and yellowish, to pure white).

When I first discovered my local population of the orange variant back in 2013, (and which still appears at the same spot every year), I initially assumed Sarcoscypha austriaca var. lutea, but soon pulled back on that thought when I discovered that at the time there was only one authenticated UK record for var. lutea.

After my own microscopy, and subsequent confirmation by Hans-Otto Baral, (and later, further confirmed by Dr Paul Cannon at Kew. who examined fresh and dried samples I sent to him), the find was confirmed without doubt, as a colour variant of normal S.austriaca.

Interesting that your examples turned red on drying. Those from my local population always stay distinctly orange.
It's also interesting that (certainly with my local population) although there are many distinctly separate little clusters of either red or orange fruitbodies, the orange examples are fairly frequently seen growing immediately adjacent to, and sometimes even touching, normal red coloured neighbours.

My article on the find, giving more details and including all relevant micro and macro photographs can be found online in this specific issue of the Herefordshire Fungus Survey Group newsletter: -
http://www.herefordfungi.org/index_htm_ ... t%2030.pdf

EDIT - Just noticed that the link you gave above is actually Hans Otto Baral's reply to my original AscoFrance enquiry.

PS: - Ken, just out of interest, would you be prepared to let me know where you found yours?
I'm sure you will have my email address from NWFG email group.
Common sense is not so common.
Top
Post Reply
4 posts • Page 1 of 1