Frequently asked questions, Member Resources, etc.
If you wish to have a post/topic moved to another topic/forum, ask via the Change Requests topic here.
Post Reply
14 posts

An Excel file courtesy of Lancashire Lad, for forum members only. Please don't share the link with non-members. Copyright Mike Valentine.
An Excel list of accepted common and scientific names or as a pdf if you don't have a spreadsheet programme that can open Excel files.
Adam Pollard
Site admin
Top

Thanks for putting this up Adam. - I hope people might find it useful.

PS: I don't claim any copyright for what's contained in the file.
I collated the information from sources freely available via the internet, and put it into searchable spreadsheet format
I'm quite happy for anyone and everyone to make use of the file if they find it helpful.

The revised list can be found at this BMS web page: - http://www.britmycolsoc.org.uk/library/english-names/ but unfortunately is not alphabetically searchable by common name. (And also, at the time of writing this, it appears that the first three species on the list are missing!!!!).

I have revised my searchable Excel file to accommodate the added species, and will ask if Adam might include a linked version of that revised searchable file here.

Just for info, the download is in Microsoft Excel 97-2003 format, and is approximately 250KB filesize.

For anyone who wants to see how it's formatted, here's a quick screengrab of the first part of the list: - 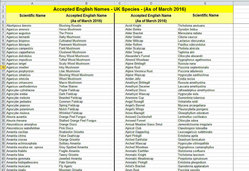 The link in the first post does not appear to be working?
Top

Just noticed that the link to my list in the original post, (searchable by both accepted common name and by scientific name), isn't working.

As it happens, over 300 more common names were added in 2019.
(Currently, 1808 of the species so far recorded in Great Britain now have "accepted common names").

I've revised my searchable MS Excel spreadsheet to include those additions, and have sent it to Adam. (In both Excel 97-2003 and PDF formats).
Hopefully he will be able to make the list available on the forum once again.

While I understand the reasons for the use of vernacular names, and the Continentals seem to have them for even a lot of micro-species, seeing the list like this highlights one of my niggles.

You look down the left hand side and there several species whose name starts "Agaricus" - they are all related - makes sense.
You look down the right hand side and there are several species whose name starts "Alder" - they are not related - makes less sense. At least in this instance the Alder bit could be helpful if that was the associated species, but it is not the case with the majority of vernacular names.
Perhaps Linnaeus was on to something . . . .

I am currently in the process of updating a Yorkshire Mycota. The species total is fast approaching 5500 species; for species accounts of fungi in this list I shall of course include the accepted English name, but in each case I will have to look it up. 5500 species names (most of which I could at least place in their correct taxonomic position if presented with them) is quite enough to remember.
Top

You will note, if you have a look at my screengrab some six posts above, that I do use "Accepted English Name" on the column header, as that is what BMS use at the head of their version of the list.

When people refer to fungi by these names (especially beginners, people who are not familiar with fungi, and when used in informal foraying situations), most will ask "does it have a common name?" rather than "does it have an English name?".

So for me, "accepted common name", "accepted English name" or "accepted English language name" all mean the same thing.
Regardless of which phrase is used, it is the use of the word "accepted" which signifies that the name in question is officially recognised.

If we want to split hairs, the BMS page itself, is worded thus: -
QUOTE "A working party formed in 2005 after the publication of the Checklist of the British and Irish Basidiomycota has been increasing the number of common English language names for our fungi".

To split even more hairs - my use (in posts on this thread) of "Latin names" isn't strictly correct, because some fungi names aren't derived from Latin.

More correctly, I should have used "Scientific names" - But again, when most people, and I include myself, (other than when in strictly mycological circles) discuss such things, they will usually say "this is a such and such, its Latin name is . . . ", rather than "its scientific name is . . . .".
(Although again, you will note that I do use "Scientific Name" as header on my searchable list).

I tend to use "vernacular name" but that's by the by.

Latin name is fine as the Greek and other languages in the epithets have been Latinised. Indeed there is an argument that there are three Latins - Classical Latin, Medieval Latin and Botanical Latin. The last mentioned is interesting in that if you look at the Latin description of a plant or fungus you will see that verbs are not used and there is much use of the ablative case: with a tall stem, with pink spores etc.

The main reason I'm posting here is to point out that Stearn's brillian "Botanical Latin" is now available as open source: https://archive.org/details/BOTANICALLA ... N/mode/2up

I recommend that everyone read it its wonderful (honest).

BTW the reason I can't create a proper link to that website is because my BBCode is off - can anyone suggest why?