Rummaging in my Herbarium

Rummaging in my Herbarium

As part of my lock down activities I have been rehousing my herbarium into more organised cabinets, a process which turned up specimens that just needed looking at, some with interesting results. A fertile Chrysothrix flavovirens specimen from lignum on standing dead Yew in Birch - Sallow -Oak - Holly Bog Woodland collected on the 04/01/2003 from near the Avon Water, in the south of the New Forest, produced Minutophoma chrysophthalmae pycnidia in an apothecia. A lichenicolous fungi I recently found new to England in 2018 and have found a couple of times since then.

The best areological find was a specimen named Rinodina exigua and then crossed out and renamed Rinodina oleae. The latter is a common species on nutrient enriched habitats, which was wrongly called Rinodina exigua in Britain before LGBI 2. In the strict sense Rinodina exigua is a much rarer species of veteran trees in open habitats. Until 2018 it was not thought to occur in Britain, but it was then found during the BLS survey of Moccas Park on an old Ash. Since then it was found in a park on an old Oak in last years BLS Surrey autumn meeting and on an Oak in Blenheim Park, Oxfordshire by Brain Coppins. Refiling this specimen, collected from an old Oak in a wood inside parkland in Roydon Woods Nature Reserve, New Forest in 20/05/1995, I thought, this needed a quick look. 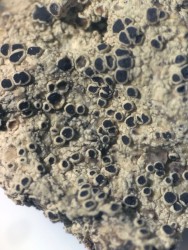 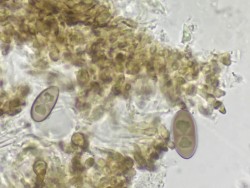 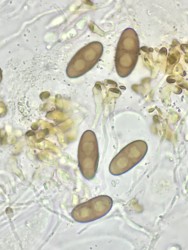 Yes, the septa had the distinctive thickening at the ends and an abrupt narrowing in the middle of the Physcia-type of spores. This ruled out Rinodina roboris, so it was after all really Rinodina exigua and not Rinodina oleae. A great find, new to Hampshire and a fantastic addition the the Hampshire Wildlife Tust’s very lichen rich Roydon Woods reserve. It was found close to where in 2017 I would find Coenogonium tavaresianum new to Britain. Paul Cannon had predicted, after finding Rinodina exigua on the Surrey meeting, that there were probably a few old specimens of Rinodina exigua collected from veteran Oaks and mislabed as Rinodina oleae, lurking in herbariums. I am very pleased to have fulfilled the prophecy.