I'm struggling with this one for some reason. It keys out in Dobson as Parmelia pastillifera but i'm not convinced that is right for a few reasons:

1. The white medulla does not react red with C although it did go a yellow-orange eventually (it also goes yellow-orange with K). 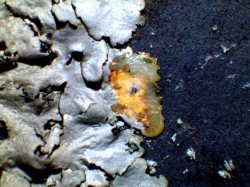 2. The normally quite visible small black isidia dusting the surface turn out under the microscope to be what I think are immersed ostioles ? (see pics) and there are rare globose cream to dark greyish-brown isidia on some lobes.

The thallus in general is 7cm in diam on slate stone. The individual lobe heads at the outer margin are 1 mm wide. The outer lobes are a light bluish grey and largely free of the black ostioles while the inner more upright lobes are densely covered in black ostioles giving the inner core of the thallus a darker grey appearance. The lobe surface is smooth and papery (dry) with a slight shine and a black margin. The lower surface of the lobes is generally black (occasionally dark brown at inner thallus) with simple black rhizines extending to the outer edge of the lobes.

I think I am still in Parmelia territory with this one, but cannot pin it down. Any ideas ? 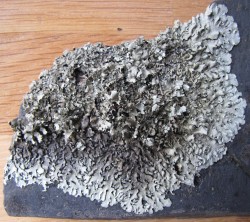 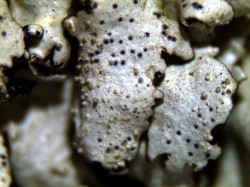 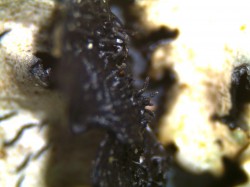 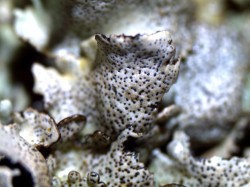 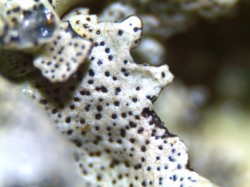 Hi
Have you considered Dermatocarpon? Mostly this genus is without rhizines but has immersed perithecia with visible ostioles, as in your pictures. Chemical reactions negative and it doesn't, in my experience, have adpressed lobes round the edge, as your photos show. The latter lobes do have the look of Parmelina. Could you have two species intermingled? I look forward to someone more knowledgeable commenting!
Caz
Top

Thanks for the comments. It was the images of Dermatocarpon online which looked most like the inner thallus covered in perithecia with ostioles and helped me identify those. I dismissed Dermatocarpon though because I assumed two species could not intermingle in this way, but maybe you are onto something and it would explain why it doesn't key out right.

That does not look like a not a Dematocarpon to me, looks more like a poorly developed Parmelina pastillifera, the "black ostioles" are pycnidia, which are quite frequent on Parmelina pastillifera (see pictures http://fungi.myspecies.info/taxonomy/term/8103/media), the globose isidia are just developing. The spot tests are odd, but you are getting a C + reaction and I am not sure you are testing the actual medulla, which has different reactions to the cortex. From the LGBI2:

I might be something else, but I am not sure what.

Thanks Neil - I did scrape away the cortex to reveal what I think is the white medulla below (beginner so I may be wrong) and applied the chemicals to the white surface. I'll double check though.

So there's no chance I could have a Dermatocarpon growing on/in middle of a Parmelia that is underneath - is that correct ?


So there's no chance I could have a Dermatocarpon growing on/in middle of a Parmelia that is underneath - is that correct ?

No Dermatocarpon has rounded little divided lobeshttp://fungi.myspecies.info/taxonomy/term/4783/media, there is nothing like that in the pictures and Dermatocarpon species have no spot tests at all and certainly not C + reactions.

I called the black spots pycnidia, but http://fungi.myspecies.info/taxonomy/term/8103/media says the anamorph (asexual stage) is not seen in Britain, so these are possibly isidia initials? Similar structures are certainly frequent on some thalli in the fungi.myspecies page. If this was a Dermatocarpon the black spots would be fertile perithecia with asci and spores inside.

I am going to throw another suggestion into the mix, not a definite identification at this stage. What about Xanthoparmelia conspersa? Although I would expect X. conspersa to be a yellow-green colour, that does depend on the specimen and the lighting. Mark, when viewed in daylight, does the thallus have any yellowish-green tinge or is it really pure grey? The morphological details seem to fit X. conspersa - the presence of isidia, the often numerous pycnidia, the lower surface mainly black with stubby rhizines. This suggestion would also explain the K reaction. I am not sure what to make of the supposed C reaction - I think we need a retry with that and carefully record what happens immediately on adding strong C to the exposed medulla.
If we decide that Xanthoparmelia is the right direction to go, then we also need a more careful K test just to rule out X. tinctina.
Top

Yes it is physical more like Xanthoparmelia conspersa, the silver-grey colour put me off, rather than the usual yellow-green colour, possibly an usnic acid deficient morph, if the photo is giving the right colour?

It could be a chemical var. without usnic acid but perhaps more likely to be an individual in which the usnic acid colour is less apparent. Perhaps specimens growing in shade (or other environmental factors) leads to them having lower concentration of usnic acid. I have a nice specimen of X. tinctina which appears pure grey and some specimens of Hypotrachyna sinuosa are grey with little apparent hint of yellow-green.

One thing I noticed about your spot test is that you appear to have applied quite a drop of reagent. I prefer to apply reagents with e.g. the tip of a cocktail stick. If excess reagent is applied, one of several things might happen. The lichen substances might be dissolved and diluted to the point where they don't react properly or substances from one structure (such as the medulla) may leach up into the cortex (or vice-versa) and give anomalous results. LGBI2 claims that the cortex of Parmelia sulcata is 'K+ yellow>red'. This is presumably due observation of clumsy, profligate testing. The cortex of P. sulcata is K+ yellow and the incorrect stated reaction in the 2009 'Flora' is probably due to salazinic acid from the medulla being flushed up into the cortex and reacting there. In addition, I have seen some good specimens ruined by great splodges of reagent.
Best wishes, Mark
The photograph shows the true spot reactions of Parmelia sulcata, performed carefully with the tip of a cocktail stick. 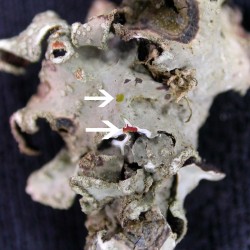 Thanks for the additional input Mark and Neil

Mark - can confirm the thallus is light grey with no hint of yellowish-green. I had been using a pipette before which drops a rather non-specific glob of reagent on the testing area as you noticed. Used the tip of sharp pointed tweezers this time to drop on just the white medulla material. I got C- and K+ orange-yellow in two separate areas. 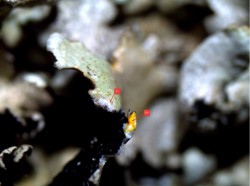 When I saw the initial post I was tempted to suggest Xanthoparmelia conspersa, but as a novice was rather reluctant to make the suggestion. The comment about using a tiny drop of reagent for the spot test is important, and I would add that the C+ red reaction can be very fugitive with the red colouration dispersing very quickly.
These are all things which we learn with experience and I am always appreciative of the comments made by the forum's team of experts. It is the small things which are not in the books that can often make the difference. I am sure that I am not the only forum member who reads and learns, but rarely contributes. I would hate to place a burden on those who generously give their advice, but perhaps more of the inexperience forum members should post their identification dilemmas so that we may all continue to learn. I would add the provision that these should be genuine conundrums rather than just a simple identification query.
Christine Johnson
Outer Hebrides Biological Recording
Top


I would hate to place a burden on those who generously give their advice, but perhaps more of the inexperience forum members should post their identification dilemmas so that we may all continue to learn

Yes please, if I have time and some idea if will answer if not, someone else will, I hope. I would even welcome Cladonia pictures!!!

Also do not be shy, I missed the Xanthoparmelia conspersa, as I rarely see it, so was thrown by the colour due to the lack/low level of usnic acid, so everyone can get it wrong, even experts. We only lean by these sorts of discussions.