I have just completed a survey of a wood I had always wanted to look at; Coed y Rhygen, an NNR beside the Llyn Trawsfynydd reservoir, Merioneth in North Wales. This is a very wet upland wood, with limited development of the Lobarion (but what there was had increased considerably over a 2001 survey, potentially the result of declining acid rain). What was potentially more interesting was that this was a relatively high, very wet acid old growth woodland with much potential for acid bark assemblages. These assemblages have usually been much understudied in the past. So it proved here, with lots of nice things found (both Menegazzia terebrata and Menegazzia subsimilis present, brilliant for Wales) with an Upland Rainforest Index score of 29, the highest I have ever recorded I think. The wood was wonderful, lightly grazed with much regeneration but still open enough to retain good conditions for the lichens. (Also a delight not to be struggling though knee high Bramble and or head high Bracken, or worst of all, both together, I have done rather too much of that recently in Welsh SSSIs). The wood had open groves of post mature Sessile Oak at one end and, very surprising, an old growth Birch – Hazel wood at the other; not many of them in Wales. The Hazel had a rather good oceanic Graphidion for Wales with Pyrenula acutispora, Arthopyrenia carneobrunneola, Mycomicrothelia confusa, Graphis ruiziana, Arthonia graphidicola and Arthonia ilicina along with Arthonia thelotrematis and Graphina pauciloculata on Holly).

Anyway I have a couple of curiosities I will put up here.

The first is a good find of which I am sure of the identity but this is rather balanced between two current recognised species. On a hanging dead branch I spotted a slightly odd looking Mycoblastus sanguinarius like lichen with the apothecia looking greenish at the base. I split a couple of apothecia with a fingernail and yes no internal red colouring. This could be Mycoblastus affinis, which seemed unlikely for Wales but worth collecting some. 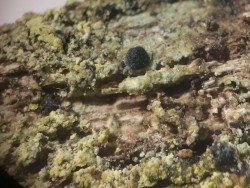 Part of the specimen 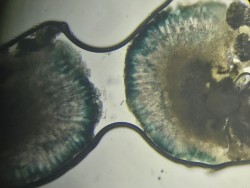 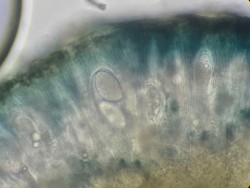 Cross sections of the apothecia in water, no red pigment in the hypothecium; epithecium & upper hymenium dark blue; one to two spores in the asci; spores simple 52 – 60 x 30 – 42µm.

This was Mycoblastus affinis, except checking the thallus spot tests (medulla K + yellow, K/UV + bright yellow & UV + white) I realised that the scruffy mucky looking thallus was not algae covered, but the thallus was actually patchily and irregularly sorediate with pale cream soredia. 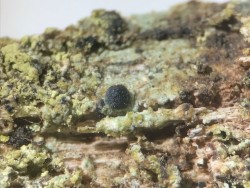 Thallus with irregular soralia to the left of the apothecia

I will post the next corundum tomorrow
Neil Sanderson
Top

My second lichen from Coed y Rhygen was spotted by Dave Lamacraft, who accompanied me for a day. This was a very beautiful lichen with dark orange biatorine apothecia with slightly paler margins but with the margin obscured in the swollen mature apothecia, these were sitting on a grey-green granular to sorediate thallus. 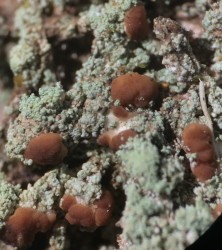 The pretty but curious lichen spotted by Dave Lamacraft

My thoughts in the field was that this might be a morph of Megalaria pulverea lacking the dark green pigment in the epithecium but if not I had no idea, so collected I it.

Back home, the thallus proved to be Pd + red and K + orange-yellow, while internally the apothecia confirmed that this was a Megalaria and that it was at least close to Megalaria pulverea. The lichen had large thick walled one septate spores, with the asci with a Biatora-type tip (in K/I a blue stained apical dome penetrated by a paler ocular chamber which has darker walls). The apothecia lacked the characteristic dark green pigment in the epithecium, which was replaced by an orange-brown pigment, which is K-, but were otherwise quite similar to Megalaria pulverea. The hypothecium was colourless to pale brown in uppermost and lowermost parts, with a mass of minute and colourless crystals that did not dissolve in K in between. The exciple is similarly coloured. The main obvious difference other than the different pigment are that the spores were larger than the sizes given in the LGBI at 17 – 22 x 7 – 8µm (Megalaria pulverea is given as 10-16(-19) × 4.5-6.5µm in the LGBI). The Pd + red and K + orange-yellow is also a bit different from the usual Megalaria pulverea reactions of Pd + red and K + pale yellow (reacting to fumarprotocetraric acid and atranorin respectively), but the K + orange-yellow spot test could simply be the reaction of a thallus with high levels of atranorin. 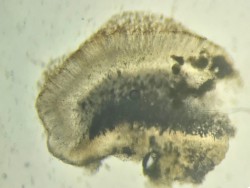 An apothecium cross-section in water 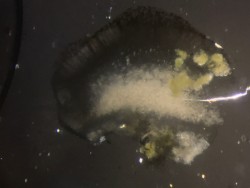 An apothecium cross-section in water in polarised light, showing the mass of crystals in the hypothecium 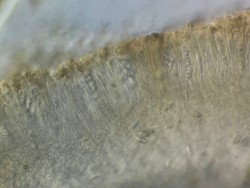 Closer view of the epithecium 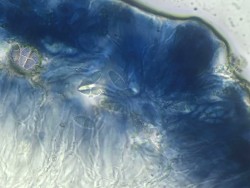 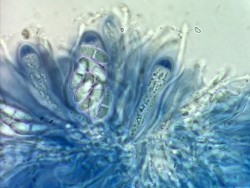 Asci in K/I, the Biatora-type tip can just be made out

If it was not for the very large spores I would be convinced that this is simply a morph of Megalaria pulverea with the dark green epithecium pigment replaced by an orange-brown one. Has anyone seen anything like this or know of any described separate species like this one?

I was sorting some Megalaria pulverea specimens today, and discovered a puzzling 'bycatch', initially quickly collected as assumed to be part of a large patch of Megalaria. Turns out it wasn't that, and seems similar to Neil's Mycoblastus affinis/alpinus described here. The young apothecia are reminiscent of M pulverea in their blue tinge etc, but the more mature fruits convex and the thallus pretty thick and warty, but with what appears to be soredia here and there given a rather scruffy appearance. So...not unlike M sanguinarius minus the red hypothecium, but with soredia. Inside - if I'm interpreting things right - the asci are 2-spored with spores in the right size range for M affinis. I would call the spore walls thick though, at c5 um, where the Flora suggests they should be thin (although doesn't specify a thick/thin-ness). K+ yellow(ish), UV+ white medulla, but didn't get a K/UV bright yellow reaction. This is from a birch in Ceunant Llennyrch, not far at all from Coed y Rhygen. Anyway, here are some pics - 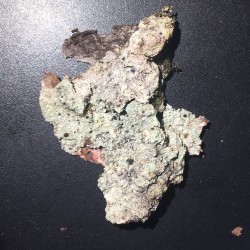 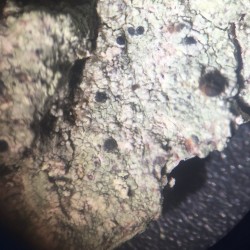 Thallus at x20, thick, warty, what appears to be some soredia here and there, apo with bluish tinge (younger ones especially), no red hypothecium 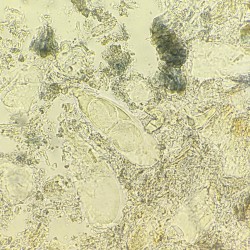 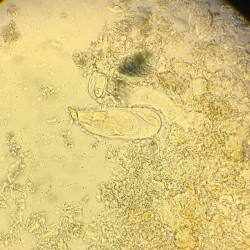 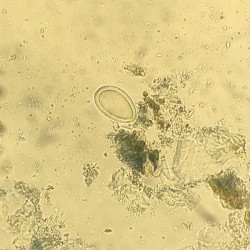 Looking on my phone, but I have an idea, looking at the thallus, how bright is the medulla UV fluorescence? because the thallus looks like some forms of Mycoblastus caesius to me. This means you might have fertile Mycoblastus caesius, which would be a first. It would also mean that this previously only known sterile lichen was put in the right genus by Tønsberg, which is impressive.

I have now had a look on the computer and yes I think this very well maybe fertile Mycoblastus caesius; well done! If correct just in time for LGBI 3. Mycoblastus sanguinarius can be sorediata (Mycoblastus sanguinarius f. leprosus) and this form has one of its few Welsh sites at the head of Ceunant Llennyrch, but this has the red pigment in the apothecia and one larger spore per ascus.

Thanks Neil. That's exciting. There was an orange-brown pigment in the hymenium/epithecium alongside violet and blues which didn't quite match descriptions in the Flora for the others. What shall I do with the specimen - who best to send it to for confirmation one way or the other? I'd normally send stuff to Steve.

Paul Cannon might be interested for the LGBI 3 amount, then, if confirmed it should go to a national collection.