Yes, common, but a couple of interesting points, and a wish to keep the forum active.
A tremendous spore-drop overnight: first image taken without water or cover; second at x100 oil with most spores starting to germinate.
Sections: first in water showing reddish, second in KOH showing green.
Lastly the macro images which I wanted to share because the close-up is clearly showing what appears to be a lichenicolous fungus, perhaps a Sphaerellothecium species. I haven't had a look yet and don't want to damage too much in case Paul Cannon would like it. 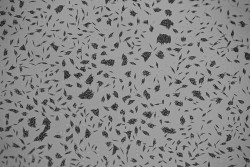 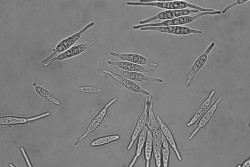 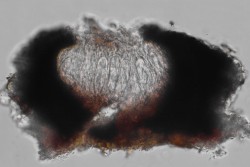 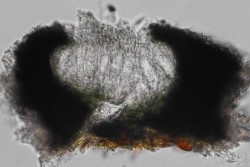 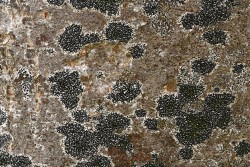 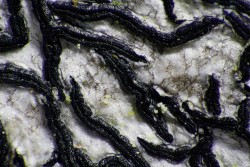 Hi Chris,
I really must try this spore-drop technique...

However, there may be reasons why lichenologists haven't traditionally used spore-drops. We often examine herbarium material and I presume that spore-drops only work with fresh specimens. If we started to use spore-drops with fresh material and traditional gentle squashing for herbarium material, we might need two different sets of measurements (our method being probably an inferior method because we will include spores which aren't quite 'ready' to be released).

The records of lichenicolous fungi in the database (including those presented here) appear to have some errors so don't accept these unquestioningly. However, it will give you an idea of what has been found on Opegrapha. I don't know what your fungus is likely to be. I have also repeatedly found a fungus rather like a Taeniolella on Opegrapha ochrocheila but haven't identified it yet.

Well Opegrapha atra is bizarrely actually Arthonia atra, and not just that but in the core group of Arthonia s. str. with, if I remember correctly, Arthonia radiata! Sometimes the parasites better reflect the natural classification than the old splits: Arthonia graphidicola now only parasitises one genus (Graphis) not two (Graphis & Graphina). In this case nothing obvious however.

If anyone does see a Taeniolella like parasite on Arthonia atra, then do shout out, Damien Ertz was looking for samples. (May just be Taeniolella punctata as found on Graphis scripta and Pertusaria leioplaca or might be another species.)

I appreciate the historical and ongoing reasons for not bothering with spore-drops. Apart from anything else, it is time consuming, something a professional lichenologist has in short supply. I enjoy doing them for giving, probably, more accurate measurements, but also, they take on a relaxed state when released from the confining asci. Not only that, they make pleasing montages. I also acknowledge the use of KOH for revealing better detail, but it does have the effect of 'shrinking' the spores. Spore-drops also give a better representation of perispores and gelatinous sheath: see this Anisomeridium ranunculosporum.

Thank your for the list of lichenicolous species on Opegrapha, I will look into it tomorrow. Is the full list available to us amateurs? 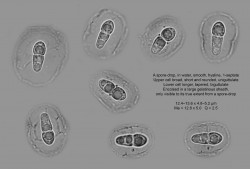 Neil Sanderson wrote: ↑Thu Feb 07, 2019 7:28 pm Well Opegrapha atra is bizarrely actually Arthonia atra, and not just that but in the core group of Arthonia s. str. with, if I remember correctly, Arthonia radiata! Sometimes the parasites better reflect the natural classification than the old splits: Arthonia graphidicola now only parasitises one genus (Graphis) not two (Graphis & Graphina). In this case nothing obvious however.

If anyone does see a Taeniolella like parasite on Arthonia atra, then do shout out, Damien Ertz was looking for samples. (May just be Taeniolella punctata as found on Graphis scripta and Pertusaria leioplaca or might be another species.)

You seem to be ahead of the game with these name-changes. BLS and NBN are still using Opegrapha atra. It's difficult for recorded to upload anything other than the name in use at the time.

Hi Chris,
I have sent you a message with my email address. I will be happy to send you the spreadsheet with the lichenicolous records in the BLS database (as of about a year ago). I had hoped that this would be made available as a download on the BLS website (along with a 'health warning' as there are undoubtedly some errors). However, it was decided not to until the data had been cleaned and, as far as I am aware, this has not been done. So we are currently circulating the spreadsheet 'informally'. Despite some the issues with the data (most of which are fairly obvious mistakes) this spreadsheet is a really useful resource for simply finding out what has been recorded on what so far in GB&I.
Mark
Top

Thanks Mark, I have responded.

Hi Mark - could you send me a copy as well please?
Jenny Seawright
Top

I suppose this should now be a fungus thread but it follows on better here. I'm sure the mycologists will look in.

Microscopy on the lichenicolous fungus below. It has the structure of a Taeniolella, quite well branched. Cell diameters: 5.0-6.9 µm, barrel-shaped.

I have no literature to take this further. There is reference to a paper: Contribution to the phylogeny and taxonomy of the genus Taeniolella, with a focus on lichenicolous taxa, Fungal Biology, Volume 120, Issue 11, November 2016, Pages 1416-1447 - if anyone has full access. 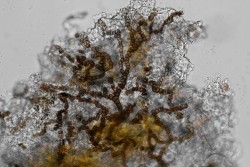 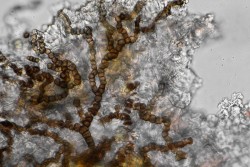 I have this paper on my computer and can send. Looking at the paper, it looks like Damien Ertz sequenced Taeniolella on Opegrapha/Arthonia atra from Belgium and confirmed it was Taeniolella punctata. If your material is Taeniolella punctata it is very young, as mature material forms black tufts on the thallus, but I have great difficulty understanding Taeniolella, even with Damien's great papers 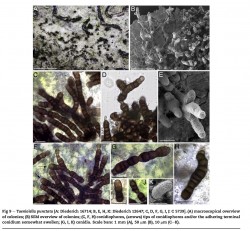 I have sent you my e-mail - thanks.

My thoughts regarding immaturity (or something else). This specimen as no vertical structure, just spreading across the host, it is a very small sample.

General question - might it be worth submitting a request for a separate Lichenicolous Fungi section as it could be really useful to keep these posts together for easier searching and reference?
Jenny Seawright
Top
Post Reply
13 posts