I always have trouble trying to distinguish Cladonia macilenta from polydactyla, when the podetia on polydactyla are under-developed and the apothecia on macilenta are similarly poorly developed. This is not helped by variations in the descriptions of the soredia on the podetia.
Dobson describes macilenta as "lower part sometimes squamulose, upper part granular or farinose-sorediate, and polydactyla as lower part squamulose and farinose-sorediate above.
Nordic Lichen Flora describes macilenta as ecorticate, abundantly farinose sorediate, and polydactyla as surface of podetia granulose sorediate.
Various websites will have descriptions which will vary between the two or describe either species as farinose- to coarsely granular-sorediate and mixed with squamules.
Some authors also suggest that a K+ purple reaction at the base of the basal squamules is characteristic of polydactyla.

This would tend to suggest that both species are highly variable. So is it possible to differentiate the species when the podetia are not fully developed?

As a novice, I usually spend hours trying to decide and the fail to make a decision. However today I perserved and I'd decided that I had polydactyla or was it macilenta?
K+ yellow, P+ orange, UV-. Apothecia undeveloped, but some red visible on the tips of the podetia. Base of basal squamules white, K-. The podetia were unbranched, slightly tapering towards the tip. Growing on old tree stump, Stornoway, Isle of Lewis.

I'd appreciate an opinion. 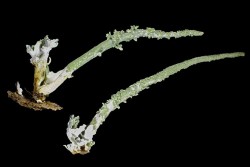 Hi Christine -they look like the sort of Cladonia I'd avert my eyes from and try and find more mature specimens!

Alan Silverside said when testing for a K reaction it is best to test the lower portion of the podetia as apothecia and pycnidia of all red-fruited Cladonia species give K+ red to purple and the underside of their basal squamules also gives a general K+ reaction.
Jenny Seawright
Top

Those are very small young podetia, so the best response is to find some nearby older ones!

As for your Cladonia: the soredia look too fine to be Cladonia polydactyla and it does not seem to have the normal blueish tinge of this species, so may be young Cladonia macilenta

I hope this helps 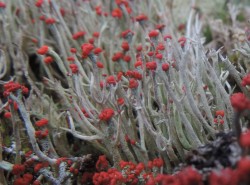 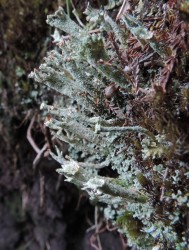 Thank you Neil and Jenny for the very helpful expert advice, which is greatly appreciated.

You are right about ignoring immature Cladonia but as the woodland in Stornoway is the only opportunity we get to look at lichens and fungi in this type of habitat we tend to make the most of our visits and I was unable to resist having a go.

According to NBN Atlas, polydactyla is recorded more frequently than macilenta in VC110. Of course this may be due to recording bias/mis-identification/island effects etc., so it is worth the effort to keep looking, although for a while I think I'll stick to well developed specimens.

I find the keys in NL Flora very useful and it is encouraging to have the endorsement.