This is something I was please to get from the recent BLS Alladale meeting, which was something of a Cladonia heaven: Cladonia stygia, basically Cladonia rangiferina with a blackened medulla. Being a Cladonia I found it a bit confusing to work out, with the Nordic Lichen Flora stating that Cladonia rangiferina could also be blackened at the base. Eventually I worked out that a combination of extensive blackening and brown younger branches distinguished it. I definitely saw it a couple of times, but not sure how widespread it was as I only got to grips with it back home. 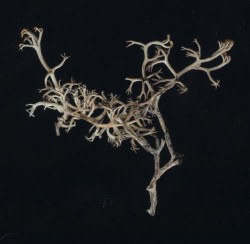 A scan of a bit of Cladonia stygia from Alladale

It was seen in damper hollows in wind blown heath with some snow lie, so with Crowberry replacing Heather. There are no other recent records from Britain, but I suspect it will be widespread if occasional at least in the Highlands.

Nice one - one to keep an eye open for on our Scottish trips. Chris
Top
Post Reply
2 posts • Page 1 of 1