I collected a rather odd looking Lecanora from an Oak branch leaning out over a glade in the New Forest the weekend before last. It was sorediate, strongly K + yellow (so not Lecanora jamesii) and fertile, it looked quite like Lecanora barkmaniana but the disks were strongly pruinose, which did not seem right, and the colour was paler than usual. I nearly left it, but collected it. 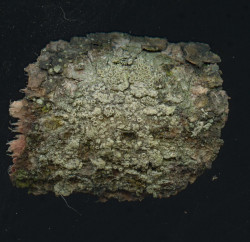 The thallus is greyish-white and verrucose, with white low mounds of delimited white soralia and is K + yellow, Pd+/– faint yellow, while there is a stronger reaction Pd + yellow reaction on the thalline margin. The thalline margin has large crystals but I did not find any spores. I will have a go again tomorrow. 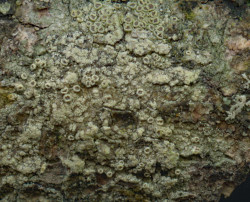 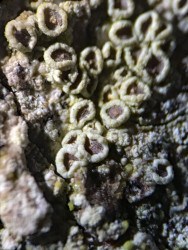 Apothecia with pruina under microscope

Which also matches the Oak branch it was on. It appears to be rare and very infrequently recorded. Looks promising, I will just see if I can find spores tomorrow.

This is exciting, Neil. Will the honeypot of the New Forest keep yielding up its secrets? Good luck with finding a spore or two.
Top

I had another go today wiht the candidate Lecanora variolascens. Spent some time looking for spores and looking at the internals of the apothecia, finally finally found a couple spores: 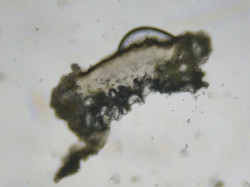 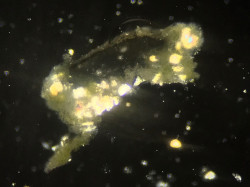 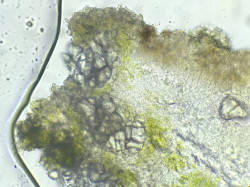 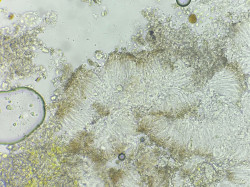 Harder squash in water, showing the K soluble brown crystals in the Epihymenium

The information in Malíček et al (2017), suggest the species has been overlooked (most specimens they identified were miss-named herbarium specimens), but that it is also scattered and rare.

I sent the pictures to Jiří Malíček, who agrees with the determination; so a nice new Lecanora for Britain. It seems, like the closely related Lecanora barkmaniana, it is often sterile, when it will be difficult to spot, basically a whiter version of Lecanora barkmaniana, in more acid and less enriched habitats. Fertile it it easy to do, with the combination of pale soralia, strongly pruinose disks and smaller spores.