Heads Up Porina rosei in Britain is Two Taxa

Heads Up Porina rosei in Britain is Two Taxa

One result that has come out of Jan Vondrak's intensive recording of 1ha plots in Scotland and England in 2018, is that what we are recording as Porina rosei is actually two unrelated taxa. Jiří Malíček made the discovery, has sequenced it and is working on this. The full results will be revealed latter, but a heads up is due to recorders, so they can start separately recording these two taxa.

I was initially sceptical, but once I started to look, it was a bit of a doh moment; I had actually picked up that there was something wrong when I looked intensively at some slightly odd looking Porina rosei in my local old growth Beech wood, Busketts Wood. This more strongly orange material that the normal green to ochre morph looked a bit different and I compared it with Porina pseudohibernica, which I had see in the Carpathians, but no it seemed to match Porina rosei. I then found fertile material and this settled it as Porina rosei. I did not take the next obvious step and look at what I regarded as the normal green to orange morph; if I had I would have seen that this was not Porina rosei! So near but so far. Jiří had not seen the widespread morph fertile but I then found I even had a fertile collection in my herbarium filed as a mixture of two very different species, had an incidental photograph of it fertile in another site and promptly found some magnificently fertile material in the New Forest last week, but as I said above this bit of the story needs to wait for the final paper.

Anyway both taxa are normally sterile but can be easily distinguished by their isidia under the microscope and have a different field jiz.

Porina rosei s. str.: has ochre to orange-brown isidia (at least I have not seen it green yet), which are quite narrow, 15 – 25 µm wide, with a clear cortex of loosely packed projecting cells, which is clearly only one cell thick. In the field the mounds of coralliod isidia have a soft mat look and lack strongly green tints. 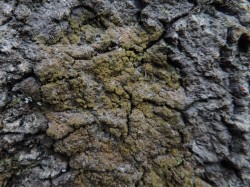 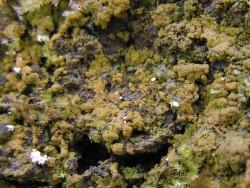 Porina rosei s. str. on Beech in the New Forest 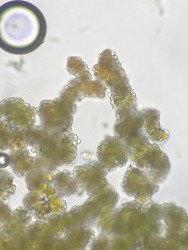 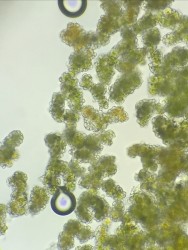 The other taxon: this has green to ochre isidia, which are much thicker, 20 – 50µm wide, with a compact clear cortex, which appears several cells thick, with the outer cells protruding only a little, giving a subdued papillose outline. In the field the mounds of coralliod isidia have a well defined shiny look and are usually in part green. 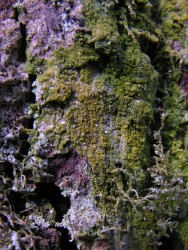 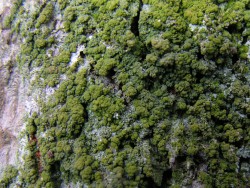 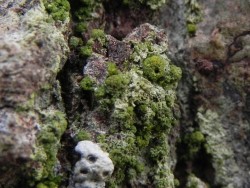 The other taxon, all an Oak, top Savernake Forest, others New Forest 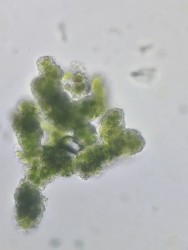 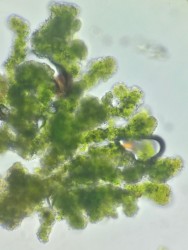 The isidia of the other taxon

Early days yet, but the other taxon is likely to be what people are mainly recording as Porina rosei. Porina rosei s. str. appears to be much rarer and has only been confirmed in two New Forest woods by me, and may be confined to Beech here. Fertile materiel has been found elsewhere in ravines, on Yew bark in the Wye Valley (Alan Orange) and on rocks in a ravine of the River Isla at the Slug of Auchrannie, Scotland (John Douglass and Brian Coppins), the latter have also found similar sterile material on rock in a ravine of the River Calder in Renfrewshire.