The Lake District weather forecast for Monday 20th January looked quite promising: - “Sunny periods with frost and possible fog in valleys during the morning”.
So, on that basis, I decided to have a look on Gladstone Knott near Crinkle Crags, to try to find “Gladstone’s Finger”, a seldom visited rock pinnacle mentioned in Alfred Wainwright’s “Pictorial Guides to the Lakeland Fells”. (Book 4, Southern Fells – Crinkle Crags 5).
As things turned out, the forecast got it decidedly wrong for the area I was interested in! – The valley was clear, as was the entire skyline around the Langdale Pikes, but the higher parts of all the fells around Crinkle Crags were shrouded in low lying cloud, which despite extremely strong and blustery winds, hung there all day.

I set off from the National Trust car park at the Old Dungeon Ghyll Hotel, and walked through Stool End Farm into Oxendale.
Following Oxendale Beck as far as the second footbridge near the confluence below Whorneyside Force waterfall, I crossed the bridge and then within a few yards crossed Crinkle Gill, (via boulders as stepping stones), to begin the fellside ascent, (with Crinkle Gill now on my right, and Isaac Gill on my left), up towards Gladstone Knott.

Initially, a vague grassy path, (more of a sheep trod), could be followed. But that soon disappeared, and it was then a case of picking the best looking route over various grassy and slightly boggy areas as I headed upwards towards the crags.
I became enveloped in thick mist just as I reached the level of the lower rocky outcrops, so just had to take the most likely looking route, as each outcrop appeared through the mist. I had to make a slight north-westerly diversion to skirt one particularly steep looking crag, but when I traversed back across its top I saw what must surely be my target about 50 yards higher up, just on the limit of vision. Getting up to the pinnacle, (and continuing beyond it), involved ascending a very steep, and extremely loose scree slope.

I’d intended carrying on up to Crinkle Crags after photographing the pinnacle, but what with the mist, and the extremely strong and gusty wind, I decided to abandon that thought!
Instead, I traversed across the plateau above Great Knott, until I came to the main Red Tarn to Crinkle Crags path. I followed that path down to the Red Tarn “crossroads”, and turned northwards for the final descent via Brown Howe, back to valley level. Eventually retracing my earlier route through Stool End Farm and back to the car.
I did find what I'd set out for, but not a great day weatherwise, and so the pinnacle will need a revisit, when the weather is being more amenable!

GPX Track of the route walked: -
. 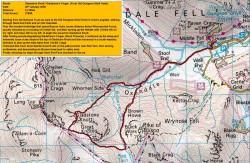 .
And some photos from the day. (Described in list form below, to ensure correct alignment of thumbnail images).

Photo 01 – Looking towards Crinkle Crags. (Pike O’Blisco at left, The Band at right). – From the road in front of the Old Dungeon Ghyll Hotel.
Photo 02 – A snowy looking Bow Fell, viewed from Stool End Farm.
Photo 03 – The route ahead. – Looking towards the head of Oxendale, with Isaac Gill to left, and a stony looking Crinkle Gill over to the right.
Photo 04 – The view back down Oxendale, towards Great Langdale.
Photo 05 – Slightly higher up the fellside, and looking towards the Langdale Pikes and the Great Langdale valley.
Photo 06 – Now up in the mist, and a first glimpse of (a not very obvious from this angle!) Gladstone’s Finger.
Photo 07 – Having finally managed to climb up the horrendously loose scree, a shot of Gladstone’s Finger from above. – The photo doesn’t do any justice to just how steep and exceptionally loose that scree slope was!!!
Photo 08 – A closer view of Gladstone’s Finger.
Photo 09 – Now back in the valley, and a shot of the Oxendale sheepfold, with the stubborn mist still hanging over where I’d been earlier.
Photo 10 – A final shot, showing how very different the conditions can be just one valley away. – This is what the weather on the Langdale Pikes had been like all day.

If you would like to see a more extensive description, and lots more photos from this walk, see: -
https://www.walklakes.co.uk/forum/viewt ... ?f=2&t=738
. 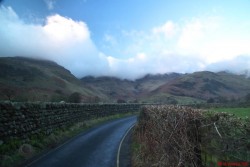 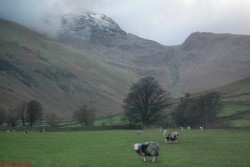 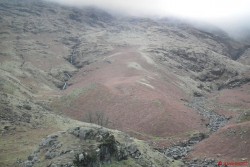 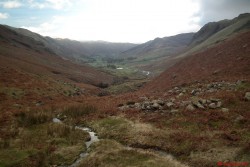 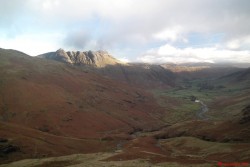 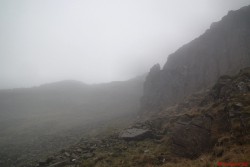 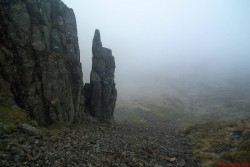 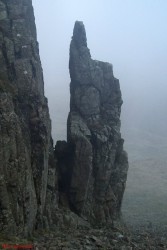 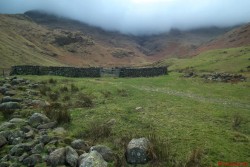 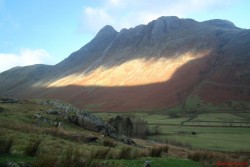 Common sense is not so common.
Top

I do like photos of craggy places and mountains in mist they give a sort of mystical feeling. Good for you going out in such weather. My daughter took me to The Ross of Mull for a week where we had a major storm, so could not go out. We got so fed up with brown seaweed and muddy slopes we drove up to Carsaigh and also up Loch Na Keal. All our photos are misty as each day was horizontal driving sleet, which suddenly turned to blue sky and sunshine, then back to sleet again. It was bitterly cold.
Top
Post Reply
74 posts